In truth it is the power point (Sedona vortexes) that activates, aligns and anchors the human. And each human will receive this in a way tailored and defined by their light quotient, attitude and system of belief. Metatron through James Tyberonn 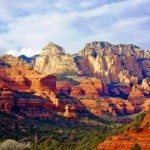 According to James Tyberonn, engineer and geologist, the Sedona vortexes function as one of the 12 Sacred Portals on the Earth because of its cosmic alignment and intensity of magnetic earth energies.

Tourists visit Sedona seeking and asking, Where are the vortexes?

So do vortexes exist? If they exist what are they?

Native Americans, as well as local residents, recognize the Sedona vortexes. They claim these vortexes to be electromagnetic in nature.

Ben Lonetree, an electrical engineer, studied and monitored the magnetic fluxes in Sedona Arizona with a magnetometer. He conducted measurements of earth magnetic anomalies and their effect on human brainwaves. After 10 years of scientific research he states,Intense electromagnetic activity exists in Sedona.He found his subjects experienced healing, shifts in consciousness, and a sense of well-being.

Magnetic energy from the core of the Earth rises to the surface throughout the Sedona vortexes. A 2003 US Geological Survey confirmed through aerial magnetic surveys the presence of a lot of magnetic anomalies over Sedona. All the pink on the map shows the magnetic areas of Sedona.

Below the surface of Sedona lie layers of basalt volcanic rock, limestone formed from shellfish, sandstone with iron oxide and quartz.

Quartz creates its own magnetic field. Also the magnetic energy of the earth, as it comes upwards to the surface of Sedona, gets focused through the iron oxide and quartz as upflows of energy.

Ben Lonetree measured upflows emerging as vortexes of spinning whirling energy in some areas of the Sedona vortexes and then spinning back into the ground – inflows – 200 to 300 feet away. 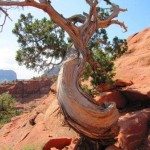 Pete A. Sanders, M.I.T. scientist, and Richard Dannelley in their works Scientific Vortex Information and Sedona Power Spot Vortex, respectively, also labeled vortexes according to the direction of their energy flow as upflows and inflows.

He postulated that the earth magnetic fields can be detected by magnetite in our inner ear fluid which then sends electrical impulses to our brain.

Upflows of magnetic energy assist expansion of consciousness and the setting of clear conscious intents in our lives and projecting them outward for manifestation. On the other hand, inflows assist in grounding the energies in our bodies for greater health, as well as going deep into our emotional issues to receive more information and for self-healing.

Finally, when you visit the Sedona vortexes you have the opportunity to Best Experience them for:

At the least, you will probably experience some peace and relaxation and a connection to the beauty of nature.

Read Also How to Benefit from the Alchemy of Sedona Vortex Sites https://www.emotionalhealthtips.com/sedona-vortex-sites

See also more about the Sedona Effect – scientific proof of vortexes by Ben Lonetree at sedonanomalies.weebly.com

Michael as a previous Residential and Self-Esteem Coach and Mentor has over 15 years’ experience teaching teen’s self-awareness, self-esteem, and self-reliance. See eBook Self Esteem- A Teen’s Guide for Girls This book is valuable for women also. https://www.amazon.com/gp/product/B009L4JLMO