How I Played Victim-Rescuer-Abuser Roles?

As a Rescuer, I desired praise. So, I give away my power in relationships to the other person. I desired being recognized.
I felt alone in my family. This feeling of aloneness persisted for about 60 % of my life. As an adult, I believed I needed to take care of myself as I had in my birth family. Being a sensitive child, I retreated inside myself to survive. I keep all thoughts and feelings to myself. My mother told later in life that she thought I was okay because I never said otherwise.
I showed up as a dyed in the wool rescuer. In addition, I believed myself flawed: low intelligence, lowest self-esteem and incapable of loving. I needed to fix myself by always studying and improving myself. This meant on a intellectual, emotional and spiritual levels.
As a Rescuer/Enabler, I desired praise. So, I give away my power in relationships to the other person. I feared saying what I thought and felt. Most of all I wanted to be seen and heard as I felt invisible in my family. I desired being recognized.
I allowed women to berate and criticize me for my lack of ability to know what I felt inside. My inner child blamed and beat upon himself. Unconsciously, I functioned as a full-blown codependent. In relationships, I paid credit cards and took out loans for cars for the person. I also looked after the person’s physical needs and give them a place to live.
As a Rescuer I assisted as chief caretaker, a constant “doer and a “fixer.” Like an addict my inner child got a temporary hit; a brief feeling of satisfaction for doing well. 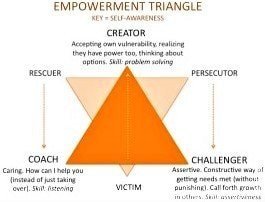 I learned the roles of rescuer and victim well. From a young child to well into middle age, I persisted in these roles. I carried a lot of repressed anger also. Throughout my life in the victim role I alternated between being in the “victim pit” or anger. Anger represents the other polarity of victim. Anger abuses when inflicted on a partner.
As an adult I took on the role of a “doer.” I accepted the codependent pattern of always wanting to fix others. I accepted the role of Rescuer and savior. Lacking self-love, I got a “fix” from helping the women in my relationships.
In my major codependent pattern, I always wanted unconsciously for the woman to tell me what a great job I had done. I gave money, cars, took on debt, provided food and shelter when the women in my relationships. I also sacrificed thousands of dollars in my association with men.